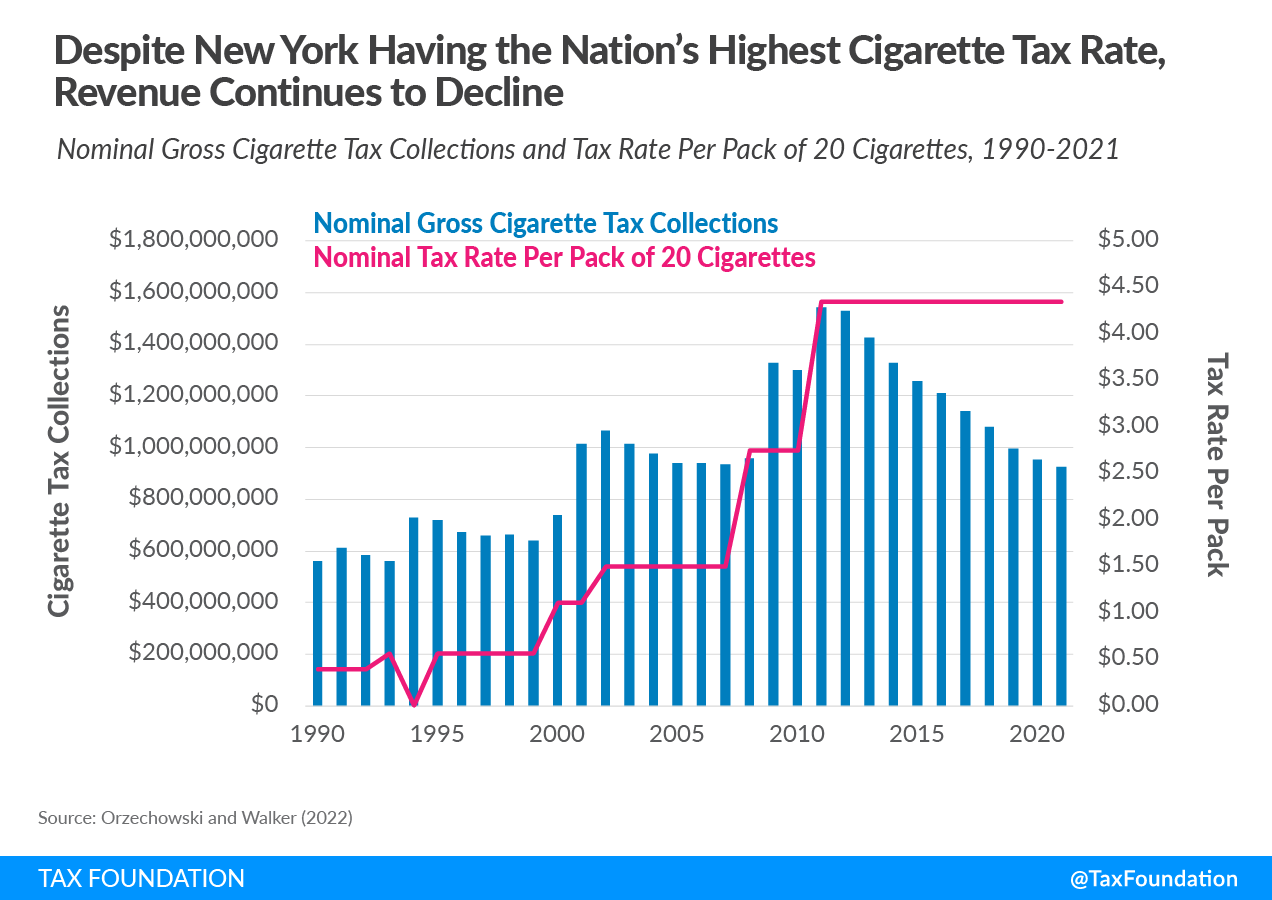 New York Governor Kathy Hochul (D) has her sights trained on tobacco. Earlier this month, she proposed increasing the New York cigarette tax rate by $1.00 a pack and extending New York’s existing flavored vaping ban to all other flavored tobacco products. If enacted, these policies would fuel black markets and create a fiscal hole for the state to fill, all while hurting New York businesses and consumers.

New York already leads the nation in cigarette smuggling. More than half of the cigarettes consumed in the state, an estimated 53.5 percent, are purchased from illegal outlets or smuggled across state lines. The foregone revenue from the more than 250 million smuggled packs exceeds $1 billion annually. With Governor Hochul’s proposed changes, that figure could grow substantially.

New York last increased its state cigarette tax in 2010. Following the tax increase, New York’s smuggling rate jumped more than 13 percentage points, from 47.5 percent of all packs consumed in the state in 2009 to 60.9 percent in 2011. If the state were to implement only the proposed $1 per pack tax increase in 2023, New York would likely see smuggling rates reach an all-time high. And that would occur before factoring in the flavor ban.

The disastrous flavor ban experiment in neighboring Massachusetts caused most state governments to pause any notions of flavor bans. In the first year following the flavor ban, tax revenues fell by $116 million. In-state cigarette purchases fell in Massachusetts, but those sales were almost entirely absorbed by neighboring states.

Even with the flavor ban in place for only half of 2020, Massachusetts saw its smuggling rate increase by 6.6 percentage points. The additional 11.3 million smuggled packs cost Massachusetts an additional $39.5 million in foregone tax revenue. Overall, the menthol ban experience has been so poor for the Bay State that a bipartisan group of legislators has introduced two separate bills, MA S1433 and MA H2406, to repeal the ban.

The revenue implications of a flavor ban for New York would be significant. With menthol cigarettes holding a 40 percent market share, we estimate that a flavor ban would decrease New York’s revenue by nearly $225 million per year. Even with a partial offset from a $1 per pack excise tax increase, the net result would be a roughly $100 million budget hole for lawmakers to address in Albany. Seventy-six percent of that decline will come from revenues earmarked for health care via the New York State Health Care Reform Act.

To make matters worse, New York will incur additional expenses to deal with the growth in criminal activity. The added incentives of moving economic activity underground will send billions of dollars into illicit markets. Not only will New York law enforcement need to deal with more tax enforcement issues, such as vendors dodging tax liabilities and individuals selling “loosies” (loose, single cigarettes often smuggled and untaxed) on street corners, but the additional black market revenue will fuel all other elements of entrenched criminal enterprises.

Perhaps the saddest part of the story is that for all the problems the tax hike and flavor bans will create, they’ll procure almost no benefit. Governor Hochul’s office claims that the new law would reduce the number of young people smoking cigarettes by 9 percent. In an environment where more than half of the cigarettes consumed are purchased across borders or in illicit markets, an effect of this magnitude is extremely unlikely.

The average price of cigarettes in New York is already about $11 per legally sold pack, and New York City has a minimum price of $13 per pack. Most teenagers cannot afford $10-$15 a day to buy cigarettes legally. The most likely outcome is an even greater inducement for consumers to shop on the black market.

Cigarette tax increases and flavor bans are poor public policy tools for improving public health and reducing harm to New Yorkers. As the ACLU summarized in response to last summer’s FDA proposal to ban menthol, “There are serious concerns that the [menthol] ban . . . will eventually foster an underground market that is sure to trigger criminal penalties which will disproportionately impact people of color and prioritize criminalization over public health and harm reduction.”

These policies are lose-lose propositions for New Yorkers. If enacted, consumers will go across borders to do their shopping or rely on black-market suppliers. Tax revenues will fall, illicit activities will thrive, and law enforcement spending will need to increase. Lawmakers should rethink cigarette tax increases and flavor bans if their goal is to actually improve the lives of New Yorkers.

Audi’s new EV is a luxury SUV with augmented reality that doubles as a pickup
State Tax Policy as an Inflation Response
Here’s where mainland Chinese traveled overseas for the Lunar New Year
Showtime to combine with Paramount+, rebrand with new name
Goldman Sachs CEO David Solomon gets 29% pay cut to $25 million after tough year