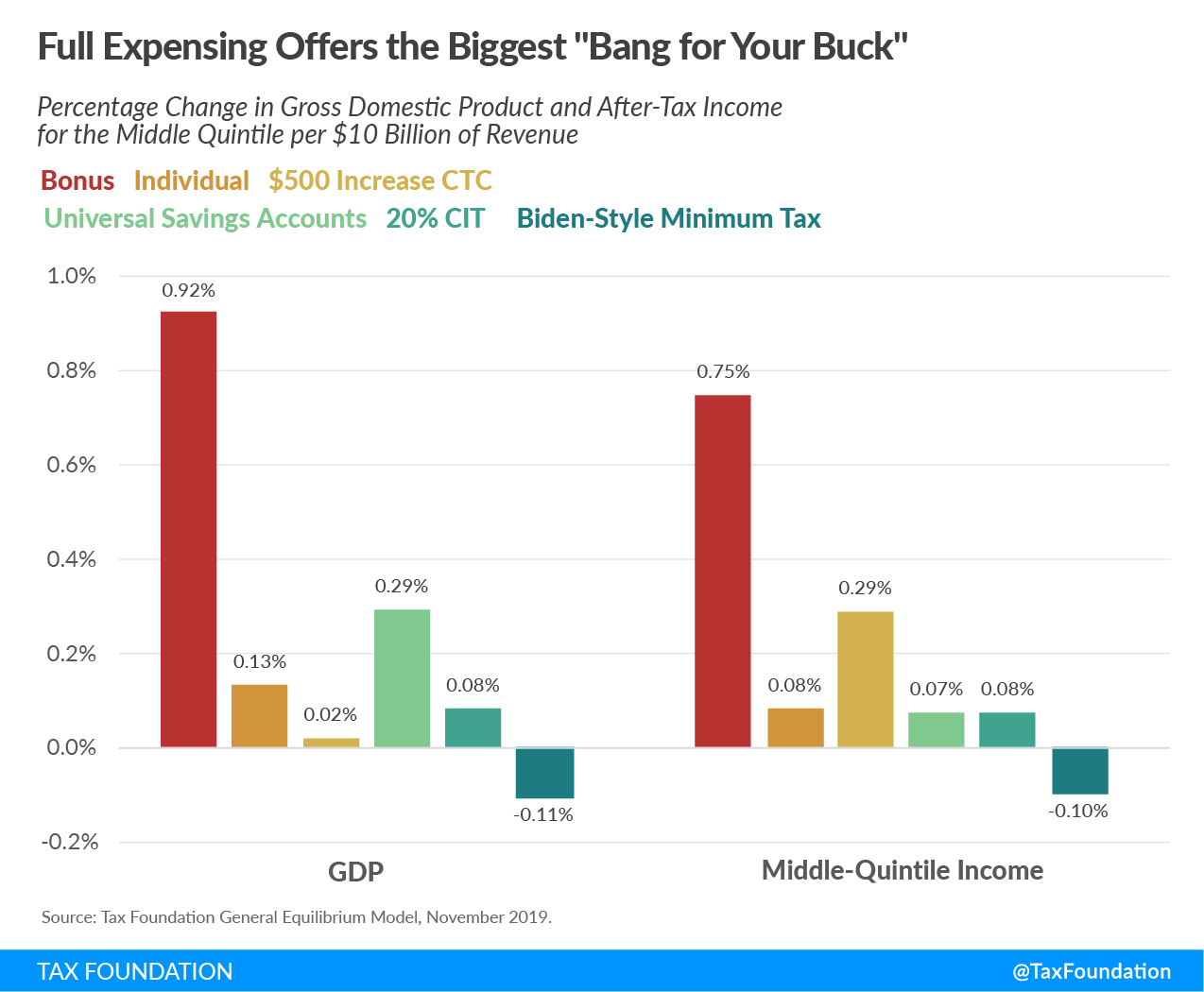 Earlier this week, the House of Representatives approved their rules package for the 118th Congress. One notable change to the rules will require the Congressional Budget Office (CBO) and Joint Committee on Taxation (JCT) to produce estimates of the “budgetary effects of changes in economic output, employment, capital stock, and other macroeconomic variables” resulting from major legislation—also known as dynamic scoring. These rules applied from 2015 to 2019 before they were dropped.

The reincorporation of dynamic scoring into the House legislative process is an opportunity to remember why dynamic estimates matter. Lawmakers should use the most comprehensive analytical tools available to them—like dynamic scoring—to make informed decisions about policy changes.

The economist Thomas Sowell once said, “there are no solutions, there are only trade-offs.” That lesson is especially true in tax policy and in the choices lawmakers must make in funding public investments. As a general rule, tax policy has three levers lawmakers must balance—revenues, equity, and economic growth. Each of the factors cannot always balance equally.

In other words, lawmakers must decide which is most important: (1) how much revenue a tax will raise, (2) progressivity, or who bears the burden of the tax, or (3) what impact a tax will have on economic growth. Dynamic scoring aids lawmakers’ understanding of each trade-off.

Policymakers on Capitol Hill have historically evaluated changes to the U.S. tax code using an estimation method called static scoring. Also referred to as conventional scoring, it assumes tax changes have no effect on macroeconomic measures like GDP, investment, and jobs (while it can account for the shifting of jobs and investment—for example from one industry to another—it holds total jobs, investment, and GDP constant).

In recent years, dynamic scoring has emerged as another valuable tool for lawmakers to evaluate the trade-offs in tax policy changes. Dynamic scoring captures how taxpayers respond to a tax change and how that, in turn, affects the macroeconomy and the federal budget, incorporating standard assumptions about economic behavior (e.g., how higher marginal tax rates on labor income reduce hours worked).

For example—using Tax Foundation’s Taxes and Growth model—we find that tax changes with the same static revenue cost can have vastly different effects on GDP, investment, jobs, and federal revenue.

Different tax models can lead to different results, often due to differences in methodology and assumptions. The differences produce fruitful discussions and debate about methods, approach, and assumptions when evaluating tax policy options. The JCT and CBO have sophisticated dynamic models they have used periodically over the years, and it is important that they continue to use and refine them as new information and methodologies become available.

With the more comprehensive information provided by dynamic scoring, lawmakers can differentiate between policies that might look similar using conventional methods but have vastly different effects on economic growth.

Lawmakers ought to think carefully about the incentives they create through the tax code. Taxes impact behavior and can therefore produce unintended consequences, even impacting the economy as a whole.

Unfortunately, static scoring provides legislators with an incomplete picture by holding the size of the economy constant, leaving out context legislators need to evaluate economic and revenue trade-offs between policies.

For example, taxpayers are responsive to changes in marginal tax rates by changing their decisions to spend or save, to consume or refrain. Legislative scoring should reflect this reality.

3. There Are Better and Worse Ways to Raise Revenue

By accounting for behavioral and macroeconomic changes, dynamic scoring shifts the tax debate past a simple argument over how much revenue we should raise to a more important debate over how we should raise revenue.

There are better and worse ways to raise a dollar of revenue. That’s because no two taxes impact the economy the same, even if both raise equal amounts of revenue under conventional estimates.

One way to think about it is as a hierarchy: which taxes are most and least harmful for long-term economic growth? The hierarchy is determined by which factors are most mobile, and thus most sensitive to high tax rates. In other words, what economic activities, if taxed, can easily be moved, reduced, or otherwise changed to avoid that tax?

Taxes on the most mobile factors in the economy, such as capital, cause the most distortions and have the most negative impact. Taxes on factors that can’t easily be moved, such as land, are the most stable and least distortive.

Sound tax policy should neither encourage nor discourage personal or business decisions. The purpose of taxes is to raise needed revenue, not to favor or punish specific industries, activities, and products. Minimizing tax preferences broadens the tax base so that the government can raise sufficient revenue with lower rates.

Another way to think about the different effects of tax policy changes is to consider which taxes have the largest effect on the economy per dollar of revenue raised—a sort of “bang for your buck” analysis. For example, we find permanent full expensing of capital investment would produce greater economic growth and higher after-tax incomes for middle earners per $10 billion of revenue lost than alternative options, such as cutting individual income taxes.

This kind of information is vital for policymaking. It is a welcome change to require it from the JCT and CBO for major legislation.

It is also important to remember that while dynamic revenue estimates may show a lower amount of revenue loss than a conventional score due to higher economic growth and correspondingly higher tax revenue, dynamic scoring shows that tax cuts do not pay for themselves.

Tax policy is all about trade-offs, and dynamic scoring is an essential tool for policymakers to understand and quantify trade-offs. Since there are better and worse ways to raise government revenue, lawmakers deserve a more comprehensive understanding of a tax law’s projected effects on the economy, government revenue, and everyday taxpayers. Any changes to the tax code should be guided by the principles of sound tax policy: simplicity, transparency, neutrality, and stability, and dynamic scoring supports those efforts.

IRS warns tax refunds may be ‘somewhat lower.’ With high inflation, that’s a ‘double whammy’ for families, says advisor
Buy this Soaring Tech Stock Up 100% in the Last Year for More Upside?
GM smashes expectations and guides toward a strong 2023, despite margin squeeze
Tourism is roaring back in China. But the $6 trillion consumer market is digging itself out of a deep slump
Spotify shares pop after earnings show strong user growth